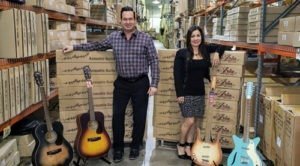 Once a Latin music specialist, now a broad-based distributor, LPD looks to give retailers an edge

Harry Bernstein took a trip to Mexico in 1963 and came back with an idea for a music company. Calling the business La Playa Distribution, Bernstein began importing Mexican hand percussion including maracas, bongos, and claves, which he kept in the trunk of his car and sold to music stores around metro Detroit. Later he opened a warehouse on Detroit’s Woodward Avenue and pushed into guitars and drums, followed by band instruments, accessories, guitar and drum parts, and finally pro audio. Although the business would move and expand several times from the 1970s through ’90s, Bernstein had already laid the groundwork for what the distributor still does decades later. Now known as LPD Music, the company remains a source for standout products from Mexico, notably the Paracho Elite Latin Stringed Instruments line— through today that’s just one piece in a distribution portfolio of top-tier global brands. More than being bigger and more diversified, however, the LPD team says its role as a distributor has changed since it got its start in the last century. With newer competition to traditional retailers coming from Amazon, eBay, and other platforms, they say, it becomes LPD’s job to curate a mix of products that give dealers an edge in consumer appeal and profit margins. “The proliferation of new sales channels has certainly made business more challenging,” says Sonia Vallis, LPD president and daughter of the late Harry Bernstein. Since 2007, she’s headed up a team including her husband, Tom Vallis, LPD’s vice president and a longtime guitarist, guitar instructor, and veteran of both retail and distribution. “There are many products that historically were profit centers for dealers that are now sold online, direct to U.S. consumers from Chinese manufacturers and trading companies,” says Tom. “This is why it has become so important for us to focus on products that allow our dealers to be competitive.” Based in Madison Heights, Michigan, a Northwest suburb of Detroit, LPD is a longtime presence in the Midwest but serves music retailers nationwide, including those in Alaska, Hawaii, Puerto Rico, and the U.S. Virgin Islands. Among its standout brands is the Paracho Elite line, which LPD has owned since purchasing its forerunner, the Lone Star Guitar Company, in 1998. Manufactured in the mountain village of Paracho, Mexico—widely recognized as a center of fine lutherie—Paracho Elite is the most complete line of Latin instruments available from a U.S.- based company. The range includes instruments played in Mariachi music and other Latin styles, including the Puerto Rican cuatro, Cuban tres, and Columbian tiple. Since 2010 LPD has also been the exclusive U.S. distributor of Danelectro Guitars, whose rich history dates back to 1947. “It’s almost impossible to find a popular guitarist from the ’50s through the modern day who hasn’t owned a vintage or new Danelectro,” says Tom, who called the line a “tremendous” source of growth for LPD. The distributor recently began offering a new Korean-made Danelectro model, the Stock 59, that’s drawn praise for its high value at a price tag of $299. “Our dealers are telling us that the quality is absolutely amazing for the price point,” Tom says. In one of its newest additions, LPD became the exclusive U.S. distributor for Aria Guitars last year. As for non-exclusive brands, LPD is a distributor for hundreds of prominent lines including Dunlop, Snark, Billionaire, Sennheiser, Audio-Technica, Ultimate Support Yamaha, Grover, L.R. Baggs, Fender, Casio, Selmer, and Zildjian. Its selection of proprietary brands, distributed worldwide by LPD, include TKO Percussion, Latin Groove, City Limit Straps, Axtron amps, and Little Grass Shack Ukes. “We wish to continue to offer our dealer base a wide variety of high-quality products that are profitable and unique,” says Tom. “Dealers have counted on LPD for many years as a reliable and complete supplier with same day delivery, and we want to continue this partnership.”